Barbara DeLory took her first painting class in the late 60s from Ruth Wainwright. She was a lovely person and a wonderful artist. She tried not to take herself too seriously and allowed the painting to take over sometimes, a philosophy Barbara tries to adopt.

Barbara is currently the vice-president of the Contemporary Art Society of Nova Scotia, and workshop coordinator of the Dartmouth Visual Arts Society. She paints for both of their yearly exhibits held at the Public Archives and the Craig Gallery. Recently she was one of ten winners from a group of 800 in a wine contest for Annapolis Highland Vineyards. Her label is featured inTouch June 2011 www.gov.ns.ca/econ/tourish/intouch/2011-June/newsmakers.asp

Ron Hazell, Golumba Kim, and Nora Gross, all respected members of the Canadian Society of Painters in Watercolour, have been some of Barbara’s art teachers. Barbara keeps exploring new subjects as she travels along the road of life, including her new book Three Centuries of Public Art: Historic Halifax Regional Municipality, released by New World Publishing September 1, 2011.

Barbara's Three Goddesses' postcard is available for sale at BookMart on Spring Garden Road and Atlantic Carrfour in Historic Properties. 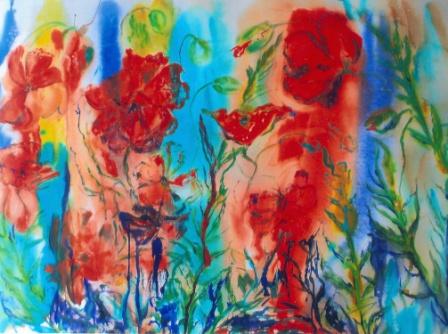 Barbara's Blowing in the Wind received an Honourable Mention in the Open categoryat the Contemporary Art Society annual exhibition 2014 at the Public Archives of Nova Scotia.

Barbara's Sunflowers received an Honourable Mention at the Contemporary Art Society's annual exhibition 2013 at the Public Archives of Nova Scotia.